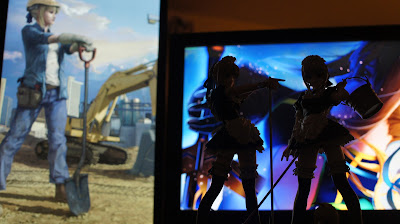 I’m in a figure state of mind: sales, selling stuff, cleaning, putting things where they belong…and did I say cleaning? 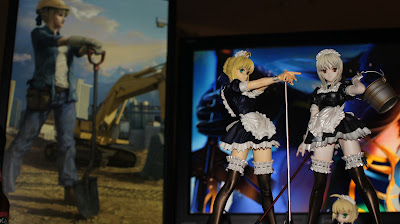 It was late, I had some drinks, and thanks to Alter re-releasing these two eternal french-style maids in 2012, their value plummeted by half roughly, since their peaks. That was reason enough to get these two ladies on my mind late at night that night. I had remembered that I had these two, unopened, in boxes, and I figured it was time. Too bad they weren’t years-old scotch whiskey or some such (This Saber aged for 5  years! Yeah! okay.jpg.) OK, technically three ladies.

Actually, I was just messing with the 30mm and seeing if I really want to splurge for a macro this holiday. I’m leaning towards no. 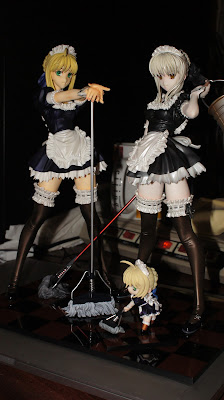 These two figures were released during the height of the Fate/stay night hype. Or maybe better put, when the fandom in Japan were all gue-hee-hee over Hollow Ataraxia, and the rest of the world was surfing in the wake of that. It was the end of an era, and in 2007 things were peachy unless you were a market oracle. That was a long time ago. The Saber Alter version of this figure came out as an exclusive in 2010, which was about a year or two when the PVC fixed-pose anime figure market really turned that corner. It was hype. The original Saber maid got a re-release then.

Welp, a few more snaps to share. I’m trying to avoid those panty shots but I noticed Saber Alter’s ruffles tend to hike up just that tad more than Saber. What’s probably more amusing is how she is donning some kind of swimsuit underneath while normal Saber wears, well, what you’d expect. 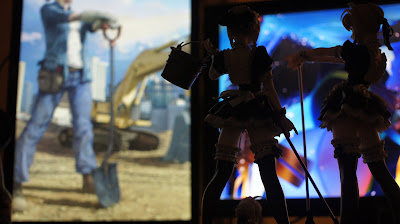 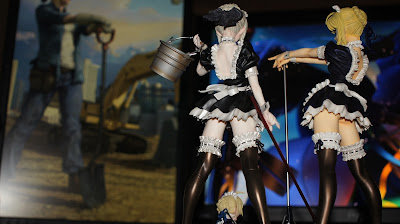 The only real technical thing to note is the base. In 2010 Saber Maid got a re-release, which is just more of the same to go with Saber Alter. In 2012, Saber Maid got a new designation as “Maid ver. R.” The R might mean something, I don’t know, but she now comes with a checkered floor base rather than the standard oval, and the new base matches the Saber Alter base in depth, making it easy to display next to each other. If you don’t have that, well, you’ll have to play it ghetto like how I’m doing it. 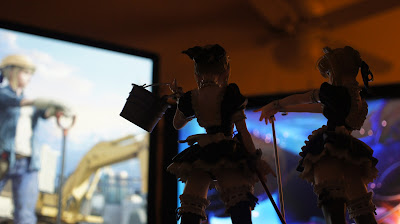 Though, the ghetto way is probably more photogenic. 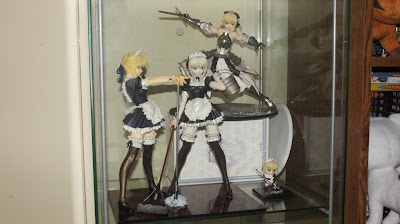 If you care to look online, the ver.R Saber Maid also has a slightly different paint job than the original, so to complement Saber Alter a bit more.

If there’s a non-technical note to make about this kinda-famous pair, it would be that zettai ryouiki and leg sculpting will always have a place in making sexy anime figures. This was probably the most extreme example. It probably crossed the line into “gaudy” on that note alone, although unlike most attempts, it didn’t seem like an accessory. Rather, it is perhaps the best example on how zettai ryouiki can be a proper centerpiece in sculpting figures.

The night ended with the three Sabers finally in their rightful places, on display, no longer in a box.

PS. Mahoromatic? Mahoromatic. Thank you, Ayako Kawasumi! Well, it’s a temporary solution; I might swap it out with a better stand, but I get the feeling that it’ll be just fine.

PPS. No, I don’t now how you’re suppose to attach the red mop to her hand. It stands up on its own all by itself, so I’m just rolling with that.

« Ghibli Retrospective 2012 @ the IFC Center: Spirited Away, Ocean Waves
Bakemonogatari, Again »
This entry was posted on Saturday, November 24th, 2012 at 6:08 pm and is filed under 3D-2D Modeling, Modern Visual Culture. You can follow any responses to this entry through the RSS 2.0 feed.